The Domino Effect: a new rug in the bedroom

It's one of those things. You decide you are purchasing 1 new item. Just 1 and the whole damn house has to get ripped apart and moved. Self inflicted of course.

I had previously mentioned we were/did get rid of our sectional sofa in the living room. More on that soon but, as we did the furniture shuffle at 11:30 at night one day last week, chairs started flying all over the place. Ones in the basement went on the main floor, mates previously split up are now sitting together, old chairs from our first home got the boot.

One of those chairs was the one in our master bedroom. The white slipcovered chair in here was a chair we bought before we had even bought our first home 12 years ago. I made the slipcover back when I didn't really know how to sew furniture things and it was on its last legs. The chair itself was still comfy and found a home at my in laws but it meant a "new" chair found a home in our bedroom. We had excess chairs [apparently on top of plants, I am also a chair hoarder] in our basement after the buyers remorse chairs made their home down there, so one of the smaller Ikea Jennylund chairs came into our bedroom.

The chair fits in the space better and allows more access to Trevor's closet so it ended up being a win win. It has the original Ikea slipcover on it and I may eventually invest in a Bemz in here with cleaner lines and no skirt but for now it works just fine.

Another part of the domino effect was we finally purchased a rug that fits the space properly. You've seen those annoying diagrams in magazines that show how you should and shouldn't be placing a rug in your bedroom. Well I've been a rule breaker for years as we had a small rug that sat just at the foot of our bed but those days are gone and I am on the right side of the design world for now. Thank goodness, I don't what I would do with myself.

Below you can see the old chair and it's loose slipcover as well as the old cowhide carpet. I just put this carpet into storage as apparently these patchwork carpets are becoming a thing again [of course they are just as I've decided to remove mine]

We put those sticky under carpet runner holder things from Canadian Tire to stop it from being slippery and give it a little bit of cushion. I am still thinking double sided carpet tape at the corners may be a good idea for vacuum purposes but haven't gotten to that yet.

I also dressed our bed for the end of summer. All my clearance bits working together. I was having a conversation with a friend the other day who is trying to invest in more quality pieces for her bedroom i.e. duvet covers, sheets etc and was asking how I have so many. Well, my small trick is hovering. Most of the pieces in our room also work in our spare bedroom so keeping tones, colours close means I can mix and match everything giving the appearance of lots of pieces. Kind of like those capsule wardrobes people keep talking about. The hovering part comes in with price. The duvet cover shown right now is from Pottery Barn. Originally over 200 US, I hovered until the price was right and bought it for 38 US on clearance. Those euro velvet shams are from West Elm in the best colour and also went on clearance for 20 a piece. The throw pillows are Oliver and Rust originals.

The kantha stitched shams were on clearance recently at Crate and Barrel for 28 CAD. I did pay full price for the quilt on our bed which I had shipped from Target since Canada murdered Target and we don't have it here anymore. To be fair though we have been using vintage quilts from the goodwill for years so we were overdue and they were all getting thread bare. And a king quilt for 100 US is not bad in my book. This is it for anyone interested. It says gray but it is a perfect linen colour. I saw the queen in store so knew what I was getting prior to ordering.

I also mildly refreshed our dresser top with a massive stag horn fern and some other natural neutral bits. The buddha has been a staple in this room since we moved here. Its one of my favourite pieces, reminds me of a funny story of the snow storm we drove through to get it and because its white will always look great. It also hides our essential oil diffuser behind it.

My mystery plant in the basket in the photo above. Any super green thumbs out there have any insight into what this is? It was a random that got mixed into a truckload going to one of my greenhouses but because it was a stowaway that they hadn't ordered no one knew what it was. I decided to give it a home because it has a great look to it and has proven to be very easy to take care of it but it's my little no name. 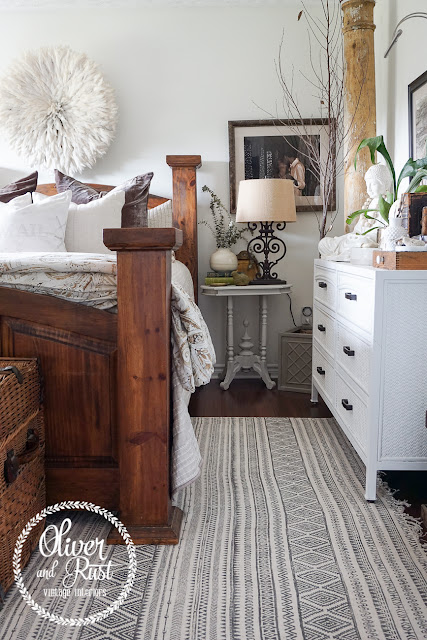 It's not a lot of pattern in the rug but, enough to make it eye catching. Neutral enough to still go season to season and washable if something or someone...ahem Franklin decides to puke on it.

A heart shaped keep sake from one of our trips years ago. It always sits on our dresser and I used a marble soap dish to elevate it a bit. One of those things that just looks like a rock but its a special piece to us